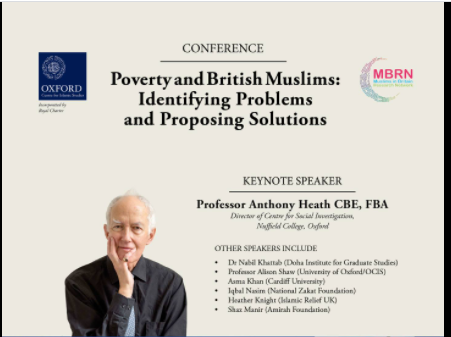 MBRN event with the Oxford Centre for Islamic Studies

The Muslims in Britain Research Network, together with the Oxford Centre for Islamic Studies, held a joint event in Oxford on Wednesday 16th, September. The thematic focus of the day was ‘Poverty and British Muslims’, and featured a keynote presentation by Professor Anthony Heath, academic responses, and a practitioner panel. The event also included the MBRN AGM, a networking session, and a tour of the OCIS new building. The MBRN Committee were delighted with the event, which had 60 attendees, and very grateful to OCIS and in particular, Dr Asma Mustafa, for hosting.

A blogpost about Professor Heath’s presentation at the MBRN/OCIS Poverty & British Muslims conference in Oxford can be accessed here (website of the Centre for Social Investigation, Nuffield College, University of Oxford).

We came up with three theories. The first is transitory factors, which is to say that Muslim groups are more recent arrivals to the UK and as such may have lower levels of education (or foreign qualifications that aren’t recognised), and are less likely to be proficient in English – these factors directly influence labour market outcomes. A second explanation might be intrinsic factors to the religion, for example, particular family values may mean lower rates of women going to work and larger family sizes. The third explanatory theory is prejudice and discrimination.

A more in-depth article about Professor Heath’s research, co-authored by Prof Li (University of Manchester), can be found here (‘Review of the relationship between religion and poverty – an analysis for the Joseph Rowntree Foundation’).

Professor Heath’s slides for his MBRN/OCIS presentation are available here.