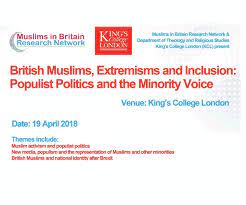 In partnership with the Department of Theology and Religious Studies, King’s College London (KCL), University of London:

Across Europe and North America, populist parties and leaders have surged in recent years, with figures such as Donald Trump and Andrej Babiš and parties such as UKIP and Alternative für Deutschland making significant electoral gains. Although different in important respects, these movements share certain themes, such as emphasis on national self-interest and hostility toward international co-operation, liberal political norms and established news media. In almost all cases this desire to reassert national identity has also involved renewed hostility toward ethnic and religious minorities – especially Jewish and Muslim minorities – as well as toward any frameworks of liberal accommodation that have allowed minorities to participate in public life on an equal footing. In the UK, this was evident in the referendum on European Union membership in 2016, which not only destabilised previously taken-for-granted political and legal frameworks but also contributed to a sustained rise in hate crime, anti-immigration rhetoric and Islamophobia.

This one-day conference on ‘Populist politics and the minority voice’ will discuss the effects of these changes on British Muslims, and how the concerns of British Muslims relate to those of other minority groups as well as wider debates about the future of liberal states, free speech and ‘fake news. Since at least the 1970s, British Muslims – as a group and alongside other minorities – have been involved in a struggle for rights, for media and political representation and for recognition. What might these struggles look like in the future? What is the future of British Muslim identity, post-Brexit? How might rights and legal accommodations be affected by withdrawal from the EU? How do concerns about rising Islamophobia intersect with concerns about resurgent anti-Semitism and far-right and populist movements? How should debates about Muslims and the media proceed in an era of ‘fake news’? How can standards of debate about minorities be preserved and what can higher education and Muslim institutions contribute?

10.30-12.00 – Opening Plenary, ‘Recognising, Opposing and Offering Alternatives to Anti-Semitism, Islamophobia and Other Extremisms’